In the village of Porrera, as in the rest of Priorat, there are few wineries, apart from cooperatives, that have been in business as such for more that twenty years, when the Priorat revolution started. Modern Priorat wineries can be divided in two groups, which I think are well represented by the two Porrera enterprises I will now describe.
Ferrer Bobet is a joint venture between Sergi Ferrer-Salat, owner of one of the largest Catalan pharma companies and acknowledged food and wine enthusiast, and Raül Bobet, famed oenologist at Torres. They purchased land over the winding road that leads from Porrera to Falset. There they planted 20 hectares of Garnatxa, Carinyena, Syrah, Cabernet Sauvignon and Viognier, and built a spectacular, if discrete, cellar with a distinctive semicircular glass walled tasting room with fabulous views.
﻿﻿﻿﻿
Grapes from these new plots are not yet used: vines are too young. Rather, Ferrer Bobet buys grapes from selected vinegrowers that organically farm costers planted with old Carinyena and Garnatxa. Grapes are harvested manually in small boxes, taken immediately to the winery and stored at 3 ºC. Grapes are then selected manually before destemming and after.
Inside of the cellar, and mainly underground, the latest technology and stainless steel combine with the best wood to enable organic winemaking with gravity powered wine movements. The pharmaceutical background of Sergi Ferrer (I am also in the pharma industry) shows in the attention to cleanliness and the careful choice of materials in contact with wine.
Fermentation takes place in smallish oak vats, allowing separation of individual vineyards. Later on wine ages for fifteen to eighteen months in new French oak and twelve months in bottle.
Ferrer Bobet produces only two reds, both coming from the old vine costers:
The winery produces a total of around 25’000 bottles of these intense, elegant, mineral and fruity reds.
﻿﻿﻿﻿
Joan Simó is a winery located in the centre of Porrera, in a two hundred year old house, complete with sundial. Gerard Batllevell Simó, the owner, farms land from his family and also other plots more recently purchased. In 1999 and 2000 he planted Garnatxa, Carinyena, Cabernet Sauvignon and Syrah in La Garranxa, a plot that had been barren since the phylloxera onslaught.
﻿
﻿
Winemaking facilities are located in the lower part of the Porrera house, with the dimensions of a garage winery. Still active, Gerard's uncle gives advice and produces a superb ranci, or oxidized wine, that unfortunately is not for sale.
Gerard makes three wines, all red:
All three are dark, concentrated, complex examples of Priorat. Total production of around 20'000 bottles.
The two different ways are clear. On one hand the external money from a wealthy wine lover that is invested intensively, starting with a spectacular winery and building the wine later. What we call in Catalan to start building the house by the roof. On the other, the local step by step approach, using money only when needed and not before, utilizing old village houses and vines from the family or purchased at the cost of personal involvement.
Which is best?
﻿﻿﻿﻿
I tend to judge them looking at two variables mainly: the impact on the land and its economy and, of course, the quality of the wines. For the first group, respect to the environment and to free trade, trying not to dominate the market, and contributing to local economy can have a very positive impact. The second strategy permits in the long term local accumulation of wealth and better prospects for the young.
I think we can find examples of better and worse wineries in both groups. In the first, I find that much depends on the personality of the capital provider. If he is personally involved, has not invested a critical part of his wealth and has the good sense to listen to expert professionals, chances are good. If some of these conditions are not met, and a crisis pushes the market down, chances of survival are slim, as can be seen just now in some sad cases.
﻿﻿﻿﻿
In the second group, chance of survival is more linked to the quality of the wine and the way it is marketed, often the great weakness.
﻿
﻿
A third way is when foreign winemakers invest, but I think they tend to be more cautious and mimic the step by step approach of the locals, I do not know if out of experience or lack of money.
For me, a good blend of strategies is likely to benefit Priorat (or any other zone in a similar situation) and the wine lovers. Ferrer Bobet and Joan Simó do.
http://www.doqpriorat.org/eng/index.php
http://www.ferrerbobet.com/
http://www.cellerjoansimo.com/
Publicado por Juan Massana en 23:44 2 comments:

Can Feixes, a château in Penedès

Fifteen years ago I visited Can Feixes. For some time I had appreciated the quality of their wines, and I wanted to see the source. The owner, a delightful old school gentleman (he was an architect by training), showed us his property with enthusiasm and explained his plans for the future. 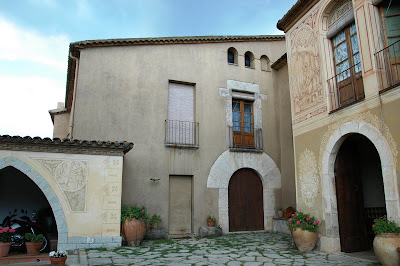 Fifteen years later, Mr. Huguet is, regretfully, no longer there to steer the course of the winery
It is easy for the successors, in these cases, to either let the enterprise languish and eventually die, or to completely change the spirit and philosophy, with uncertain results and the assurance of losing the former charm. The fact that not one heir, but three, have to take decisions makes all even more difficult.
﻿ ﻿
However, his three sons have come up to scratch splendidly. The Can Feixes philosophy remains; they concentrate on their land and grapes, respect the environment both in the vineyard and the construction of the winery, and stick to their six proven and mastered wines. Josep Maria looks after winemaking; Joan is in charge of the vineyards and Xavier takes on administration.
﻿ ﻿ 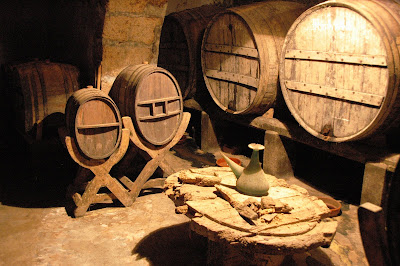 The name comes with the property. Can Feixes means house (the physical building) of the Feixes family. And it was so at least from the late fourteenth century till beginning of the twentieth, when the Huguet family took over after the Feixes extinguished. The property has some beautiful old buildings, including the one that houses the old winery, now a showpiece, with the door with the seal that can be seen on bottles. 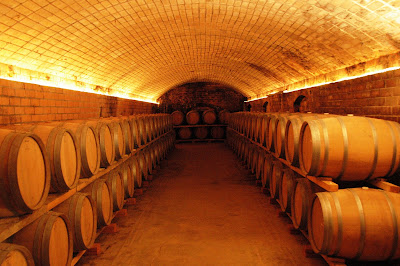 The Huguets respected the complex and have enlarged the winery mostly underground, with room for cask and bottle cellaring; in this way, the buildings look from outside pretty much the same as a century ago.
﻿ ﻿
The estate, in the hilly northern part of the Penedès DO, has over 350 hectares, 80 of them under vine. Medium height over sea level is 400 meters, and soils mainly rich in limestone, with varying slate and clay additions. Temperature, being the estate higher and farther from the sea than most of Penedès, shows a bigger difference between day and night, beneficial for slower maturing of the grapes and better acidity.
﻿ ﻿﻿﻿﻿﻿﻿ ﻿﻿﻿﻿﻿
On the selected plots most suitable for each, Chardonnay, Merlot, Cabernet Sauvignon, Pinot Noir, Malvasia de Sitges, Ull de Llebre and Petit Verdot grow on trellises, together with older (70 year) bush grown Parellada and Macabeu old vine plots. Wines are organically farmed and produced; the seal of the Catalan Council for Ecological Production (CCPAE) will start appearing on the 2010 bottles.
The estate can be compared with a Bordeaux château, with the winery sitting in the middle of the vineyards. In this way, the grapes, manually harvested and having undergone a first selection in the vineyard, reach the winery in minutes where they are again selected and enter the processing stage. The white varieties are fed into the pneumatic press without breaking the grains, so the first must to come out is of the highest quality. 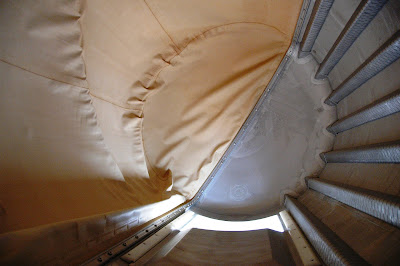 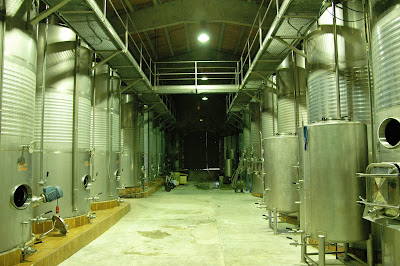 Like many other Penedès wineries, they also produce Cava, with the Huguet brand. In fact, although in the market you can find both Huguet Gran Reserva Brut and Huguet Gran Reserva Brut Nature, it is essentially the same wine: a rather uncommon Parellada, Macabeu and Pinot Noir blend (50/26/24) aged for six months in tanks before second fermentation and at least thirty months after. Brut receives a small quantity of sugar after degorjat and Brut Nature does not. Both have the distinctive small, persistent bubble and creamy aromas of Gran Reserva Cavas; the degree of sweetness (not at all or very slight) will determine the choice. 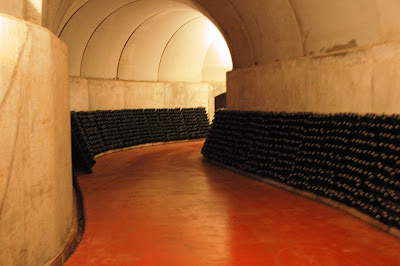 A finishing point: wines leave the winery ready to drink; no further cellaring is needed; all bottles are numbered, and those of Cava show the date of degorjat, something which is, unfortunately, not mandatory, but shows compromise to quality, in line with the philosophy of Can Feixes.

In the early eighties little Josep Barceló, still too young to read, would identify the peg to hang his coat on at his Priorat school by a drawing of a mushroom (“rovelló”) over it. In his childish speech, he would not pronounce the “r” sound properly, so his schoolmates promptly nicknamed him “govelló”, later shortened to Gobe. 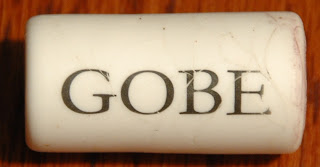 Gobe grew up among his friends, meeting them also after school to play football (their team was called “La Xusma”, the rabble), and, later on, to share a bottle of wine. In due time, many of them worked in the world of wine; Gobe himself at the Celler de Capçanes, while planning to make wine from a small family vineyard farmed by his uncle.
Sadly, in 2004 Gobe died in an accident. A few weeks later, his friends visited Gobe’s family and suggested making the wine Gobe dreamt of, as a common effort, in a non for profit way, as a tribute to his memory. The twelve friends, with the help of Gobe’s uncle and brothers, would endeavour to make Gobe’s wish come to reality.
And so it did.
Amics del Gobe (Gobe's friends) was on its way. 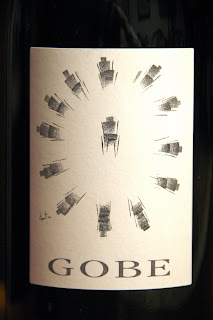 The vineyard is in the Montsant DO, at a height of some 300 m: 1 hectare of sandy soil with 80-year old Carinyena and some new Garnatxa, farmed organically. Grapes undergo a first selection in the plot, are gathered in 12 kilo boxes and taken to the Venus La Universal winery, where a second selection is made before starting the winemaking process.
After destemming and 20 days of contact with the skins, the wine goes to second year 300 l French oak casks, where it stays for twelve months. 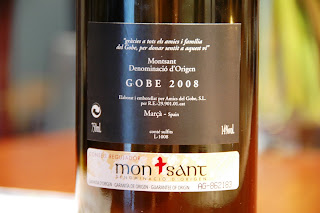 The wine itself is a good example of Montsant red. Dark cherry colour, with slightly tinted legs. In the nose red and black fruit, not overripe, with tobacco and balsamic notes. Not too much wood, letting the fruit shine. Tannins still noticeable, good structure in mouth, with a long finish. A very pleasant, straightforward, drinkable wine.

The output being around 1’000 – 1’800 bottles, it is not easy to secure one. I got mine in a visit to Gratallops, in the Bonviure wine and delicatessen shop, where Jaume Balaguer showed me his small winery (more on that on another post) and other small gems he has.
What is the future of this initiative? In the short term, the 2009 vintage will start to include some wine from the Carinyena planted in 2005. This will allow to eventually increase output to a maximum of 3’000 bottles. And with the support of winelovers, Gobe’s friends intend to go onforever; a support not so difficult to give, because at around 10 EUR per bottle the quality / price ratio is excellent.
Any of you interested in further details can join the Gobe group in Facebook or have a look at the video in Vintaix (see links below).
Perhaps from somewhere Gobe still looks after his vineyard…