Just 30 km west-south of Barcelona, Penedès is a world in itself. Within its borders we can find four different landscapes: the Garraf limestone massif that borders the sea closer to Barcelona; the coast south of Garraf; the foothills of Montserrat and the plain that stretches between Garraf and Montserrat mountains. Altitudes range from 0 to 800 m. Soils are generally poor, with clay and limestone as main ingredients. Montserrat shelters the vineyards from cold North winds, and the Garbí wind blows from the see to cool the hot summer afternoons. 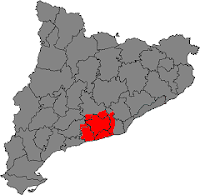 In many Catalan DOs there are wineries that produce still wines under their DO and also Cava as a side business. But in Penedès is where most of the Cava producers are found and many of them produce still wines as a side business. So most of the wineries in Penedès produce both still wines and Cava, in varying proportions.
Winemaking in Penedès can be dated back to 500 BC when the indigenous Iberians grew vines. From Roman times to the 18th century Penedès was a land of red wine mainly, until a trend started to grow white grapes in order to produce brandy. With these white grapes in 1870 the production of Cava started in the region, and Penedès most sought-after still wines were the whites till around 1970.

At that point in time, after the work of pioneers like Miguel Torres and Jean Leon (fascinating person; an entry about his life and winery to follow soon) foreign varietals (Merlot, Cabernets, Syrah, Pinot Noir, Chardonnay, Riesling, Sauvignon Blanc...) were introduced, modern equipment and techniques became widespread and the quality of the red wines leapt forward. Quantity as well: Penedès is the DO with highest production.
As a result of the vast range of climatic conditions explained above, the high technological level, and an unusual willingness of the DO Council to admit foreign varietals (while in other DOs only 10 to 20 varietals are allowed, in Penedès the count soars to 121), Penedès wines are extraordinarily diverse. In the same winery you can taste white, rosé, red, sweet, and sparkling, with several variants of each type. On one hand, that is good as it increases the offerings to customers, but on the other hand Penedès wines do not have a defined personality. Some efforts are being done, for instance, to promote Xarel.lo as the “traditional” Penedès white grape, and also in research to save and clone the last remnants of varieties long forgotten, with Sumoll as a rising star among the reds. However, there is still a long way to go.
The dominant force in Penedès, and indeed in Catalan still wines, is Torres. They have a massive production, but their quality is adequate at least, and very high in some special wines. More on Torres in the future.
The other big company is Jaume Serra, part of a large Spanish group, competing only on price with a low quality range.
My personal choice of Penedès wineries:
So close to Barcelona, Penedès is a constant temptation for the wine lover to go and discover some new, surprising wine.