Wine in the cloister


In the Middle Ages, life in the monasteries revolved around the cloister. Apart of serving as communication, it was a place in which monks walked, relaxed and meditated. 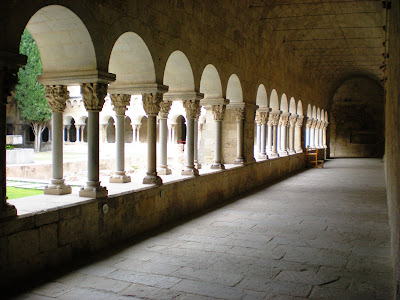 Nowadays these monuments are put to many other uses. In Sant Cugat del Vallès, the town where I live, there is an Abbey with a  magnificent cloister from the 13th century with 140 beautifully carved capitals. As most cloisters, it is warm in winter and cool in summer. All this makes an ideal setting for a popular wine tasting event, perhaps not very scientific, but enabling a lot of interaction with the winemakers.
And that is what took place last Saturday as part of the local fiesta. Organized with the usual (this being the 11th edition) efficiency by the Vins Noè wine club, there were eight wineries, five of them Catalan. Of the other three, a special mention to Bodegas del Jardín, the new enterprise of the Guelbenzu family after selling the Guelbenzu brand (Lautus, Evo), with similarly excellent wines.
First winery in the row was Castell d’Encus, from the DO Costers del Segre. This is a project, led by Raül Bobet of former Torres fame, with vineyards at a height of 800 – 1000 m, expecting climatic change to raise the temperature in the coming years, and using gravity for grape movement and geothermal energy as much as possible. However, they also do use some ancient vats carved in stone for some fermentations.
I liked Taleia, a blend of Sauvignon Blanc and Semillon, flowery and citric, and Ekam, a 100 % Riesling, somewhat disappointing if you expect a full bodied varietal, but very fresh, and showing the aromatic profile of the grape. Also very interesting was ThALARN, a 100 % Syrah fermented partly in oak, partly in steel, and partly in the above mentioned stone vats. This may be the reason of the complexity of aromas, especially of red fruits. 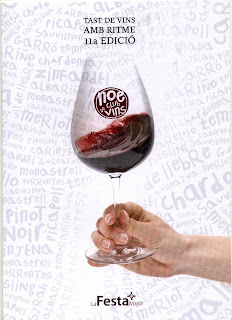 From the DO Catalunya, Ca N’Estruc offered a new wine, the white L’Equilibrista from Xarel•lo grapes and fermented in oak. A pleasant surprise: big, rich and a worthy match to the red version, out of Syrah, Garnatxa and Carinyena and fourteen months in French oak.
Next winery was La Vinyeta, from the DO Empordá. This company has a curious preference for complex blends; I tasted three wines and the simplest included four kinds of grape! The Llavors red is a blend of Carinyena, Merlot, Cabernet Franc, Cabernet Sauvignon and Syrah. Kept for five months in French, Hungarian and Romanian new oak, it is complex to the nose and very well rounded, with an already good integration of alcohol and oak.
The Celler Dosterras (DO Montsant) offered a very light and fresh white, Eterna Flor, and two reds: Vespres, from Garnatxa and Merlot, and the big, complex and mineral Dosterras, 100 % old Garnatxa with sixteen months in French oak and 12 months in bottle.
I could not taste the Cava from Bertha. Time was up; with fine wines and surrounded by walls eight hundred years old, what are two hours?

In the 70’s, when I was in my teens, my father would sometimes bring home a demijohn of Priorat. It contained a dark, strong, sweetish red wine. In a nutshell, that was the definition of Priorat in those years: wines were rough, very alcoholic (perhaps 16 – 19 %) and usually unbottled. And in many cases, exported elsewhere to give body to less muscular wines. 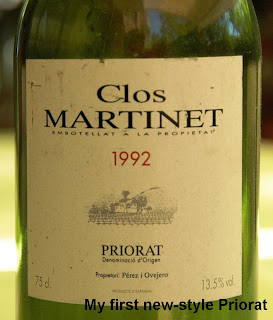 Priorat boasts a long tradition in winemaking; indeed, the name itself comes from the Carthusian Priory at Scala Dei that fostered winemaking in the area since the 12th century. And before that, wines from the Tarraconensis had been on high demand at Imperial Rome’s best tables.
However, Priorat villages, once rich and prosperous when French wine production all but disappeared due to Phylloxera, were sinking steadily into nothingness due to the high cost of vine growing and low prices of the final product, as it was then. Population had shrunk by half in 100 years.
Suddenly, at the end of the 80’s, a small group of pioneers (Barbier, Glorian, Palacios, Pastrana, Pérez), with great winemaking know-how and even greater faith in Priorat’s potential, started 5 tiny cellars and spawned a handful of wines (Clos Mogador, Clos Erasmus, l’Ermita / Dofí, Clos de l’Obac, Clos Martinet) blending grapes of old Garnatxa and Carinyena vines with younger ones of Cabernet Sauvignon, Merlot and Syrah.

With their winemaking prowess they created wines that were dark, big and strong, but also mineral, well rounded, with the alcohol (13.5 to 15%) well integrated in the structure, and showed that Priorat could supply world class reds that, additionally, had a distinct personality.
Just a remark: I said “world class reds”. Curiously, while in most languages red wine is called red (rouge, rosso, rot...) in Catalan it is called black (negre). Has it something to do with Priorat’s rich colour? Who knows...
After the pioneers others came, mostly following their pattern, which was further blessed with excellent ratings from the international wine gurus.
Twenty years later the initial wines are still among the best, and with the bonus of consistency throughout these years and the fact that the first vintages have aged well. In the meantime, new stars have appeared: for instance, Cims de Porrera, Clos Dominic, Ferrer Bobet, Mas Doix, Mas Sinén, Nin, Terroir al Límit, Trio Infernal, Vall Llach, to name only some of those whose wines I have tasted. And a number of outsiders to be followed with care.
Apart from the reds, some whites are available, usually based on Garnatxa Blanca with the addition of Macabeu, Pedro Ximenez and Moscatell. And a few winemakers produce natural sweets and rancis, reds oxidized for long years in their casks to a golden, complex finish.
The quality factors at work are several: 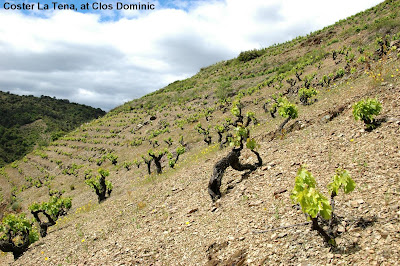 All this combines to yield very low quantities (around of or less than 1 kg of fruit per plant) that have to be harvested by wholly manual methods. Indeed, some growers still use mules for some of the steepest properties.
With this quality potential and the high costs associated with such kind of vine growing, the best value is found, as I see it, in the upper levels of quality, where production cost is not so critical in final price. However, in the lower quality ranges, although Priorat offerings are excellent, their price makes them comparable to medium-high quality wines of many other regions.
All in all, the development of Priorat has been astonishing for anybody that did not know its potential. My father would have liked to see it now…
http://www.doqpriorat.org/eng/index.php
http://www.closmogador.com/
http://www.costersdelsiurana.com/en/index.asp
http://www.masmartinet.com/
http://debrujasyvino.blogspot.com/
http://www.masdoix.com/english/index.html
http://www.ferrerbobet.com/
http://www.massinen.com/
http://www.terroir-al-limit.com/
http://www.trioinfernal.es/
http://www.vallllach.com/
Publicado por Juan Massana en 21:39 No comments:

What can we find in Catalonia?

Catalonia comprises a wealth of different landscapes and climates, from the Mediterranean coastal hills to the Pyrenees, including the inland plains. Soils are similarly varied. This means that very diverse conditions for vine growing are available. Paired with the many different grape types used we find as a result a huge assortment of wines: white, rosé, red, sparkling, sweet, fortified.
Regarding grapes, local, indigenous varieties are on the rise after many years of neglect when it was fashionable to plant the ubiquitous Chardonnay, Cabernet Sauvignon, Merlot, or Syrah. Now there is a quest for local character, and many wineries are looking back to traditional grapes like Garnatxa (Grenache) in its many forms, Carinyena (Carignan), Monastrell/Mataró, Ull de Llebre (Tempranillo) for reds, and Xarel·lo, Macabeu, Parellada, Garnatxa Blanca, Moscatell (Muscat) for whites. Fortunately, lots of old vines (over 50 years old) have survived to yield excellent, if scarce, grapes used to generate many of the best and more personal wines.
Wine regions are organized as DOs (Denominació d’Origen, Appellation of Origin). There are 12 of them: 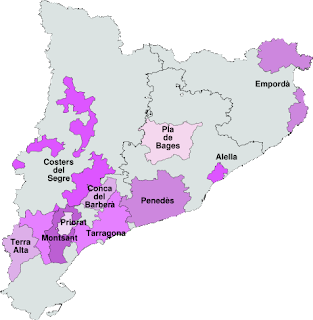 Winemakers in Catalonia are in many cases heirs of a family tradition that may span centuries, although frequently winemaking has been revived recently in the wake of the increase of demand for quality wines. Also a number of celebrities have turned winemakers; some of them are really engaged and active, while others only show up in the more glamorous occasions. In most cases, if you visit a small producer you will find an energetic, enthusiastic small team that will proudly show you their vineyards and premises and make you taste their wines. An experience radically different to visiting one of the bigger companies displaying videotapes, hostesses and a shop at the end.
Catalan people personality is usually defined as a balance between seny (Catalan for common sense, reliability, dependability) and rauxa (craziness, originality, creativity), which can tilt either way (you may remember Antoni Gaudí or Salvador Dalí for instance; more solid, conventional Catalans are obviously less well-known). Catalan wines also show this duality: it is every wine lover’s choice to tend to favour one or the other, perhaps each at different moments.
http://www.doalella.org/index_eng.php
http://www.crcava.es/catala/flash.html
http://www.do-catalunya.com/
http://www.doconcadebarbera.com/
http://www.costersdelsegre.es/eng/index.php
http://www.doemporda.com/index.php?action=home
http://www.domontsant.com/
http://www.dopenedes.es/index.php?option=com_frontpage&Itemid=1
http://www.dopladebages.com/index
http://www.doqpriorat.org/eng/index.php
http://www.dotarragona.cat/
http://www.doterraalta.com/index.htm#
Publicado por Juan Massana en 22:49 No comments:

This is mostly about wines, winemakers and wine zones in Catalunya (Catalonia), as I know them, with some remarks about wine events and restaurants (especially about wine offer and service).
I am Catalan, 50, and live close to Barcelona. Professionally I am a pharmacist by training, and I work for a large company. I write about wine from an absolutely amateur standpoint. I have had no formal training in Oenology, I have no commercial ties and only the pleasure I find in wine drives me.
I strive to be accurate and truthful when giving hard facts about a wine, a winery, or a wine region, but, after that, I just say what I do or do not like, not pretending to own the truth, but rather to spark dialogue with people that may have similar or different views, and perhaps entice those of you not yet acquainted with the wines from Catalonia.
I intend to answer timely to any comments you may make, the more (politely) controversial the better!
Why do I write about Catalan wines, and in English? Because I feel that, although some names as Cava, Freixenet, Codorniu, Torres or Priorat are pretty well known in the world at large, they may obscure the quality and variety offered by other zones or producers. My own experience is that the more you learn about wine, the more you realize the vast quantity of things you do not know – and the more you enjoy learning a little bit more! I endeavour to contribute a little information and sow the seeds of discussion and debate. There are a number of excellent blogs on the subject in Catalan or Spanish, but very few, if any, in English, so I attempt to offer English readers some information that may otherwise be more difficult for them to get.
Any wine lover visiting Catalonia is welcome to ask for tips; in the right circumstances we may meet for a nice glass or visit some place together! Most Catalan wine zones are just within 20 minutes to 2 hours drive from Barcelona.
A last remark: I am obviously not a native English writer, so please excuse my language blunders, which I do my best to avoid.
Publicado por Juan Massana en 20:19 2 comments: