Science and philosophy at Mas Martinet

When in the early 80s Josep Lluís Pérez arrived in Priorat to head the local Tech School, the zone was a stagnant, back of beyond winemaking region producing sturdy bulk red wine to be mixed elsewhere (see my previous post on the matter). But after establishing the first Oenology studies there, with the aid of his Biochemist wife, and together with the other four pioneers, he put Priorat upside down and in the radar of wine connoisseurs around the globe. Myself included; Mas Martinet were the first new Priorat wines I enjoyed, and Clos Martinet is since a given in my Christmas lunch.
﻿
﻿

A biologist by training, Josep Lluís has the typical scientific enquiring mind. He wants to know whats, whens and whys of everything, and experiments tirelessly to improve, defying conventional wisdom, even now at 75. In the beginning (early 90s) he established his Clos Martinet – Martinet Bru wines in the first – second wine model of Bordeaux, using the best grapes for Clos Martinet. From the start, even being a big, dense, dark red wine as great Priorats usually are, Clos Martinet was one of the most elegant of the bunch. Martinet Bru was a good introduction wine at a more moderate cost.
﻿﻿

But when in 2001 he surrendered the sceptre to his daughter Sara, she changed the concept. Wines would be single vineyard sourced, with the goal of expressing the terroir as much as possible. If her father is a scientist, Sara goes for philosophy.
﻿
﻿

Did Josep Lluís retire and relax after 2001? Not at all! He is very active experimenting and acting as consultant to other wineries, something he has done extensively in the last fifteen years. Present projects include making wine in unlikely countries like Egypt or Sweden. And if you meet him in his winery or at an event, he will ensnare you with fascinating descriptions of his methods and experiments, which include selective, timed watering of the vines, and closed circuit, anaerobic fermentation. A born teacher.
Nowadays Mas Martinet has four different plots and wines, as follows:
﻿
﻿ 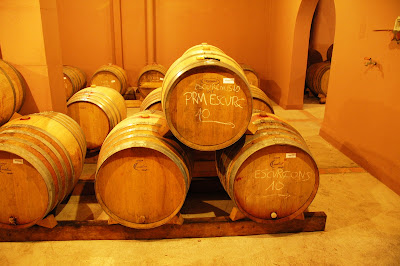 There are two additional plots, Serra Alta and Mas Seró, used for experimental purposes and also to produce kosher wine. Serra Alta is remarkable because vines are planted more tightly and develop around iron rings of adjustable height. This disposition allows increasing by two thirds the number of vines per hectare and tripling the leaf surface, enhancing vine metabolism.
﻿
﻿

All these are organically farmed, with the idea of giving back to the vineyard all that is taken away: skins, pips, stalks...except the wine, of course! Certification is expected soon.
In another post I may explain the other wines that Sara Pérez makes (not to mention her brother Adriá or her cousin Marc), alone or together with her partner, Rene Barbier Jr., son of the other great guru (imho) of Priorat. Guess what their children will be good at…
﻿
﻿