In a previous post I already commented on the fact that Catalan villages with wolves in their names tend to produce excellent wine. This time we will speak about Gratallops.
Philologists tell us that Gratallops means the place where wolves sing, but the straightforward translation of the name from Catalan would be scratch wolves.
Gratallops was the original place where the five Priorat pioneers set up their wineries and still now are producing their wines, solidly installed among the best in Priorat.
In these surroundings the hotel Cal Llop (Wolf House) hosts the Tast amb Llops, Tasting with Wolves. No actual animals around, but rather nine of the twenty-odd wineries active in Gratallops (not bad for a village with 260 people), plus four from other Priorat villages, and a guest from the Rhône valley, Maison Tardieu-Laurent. 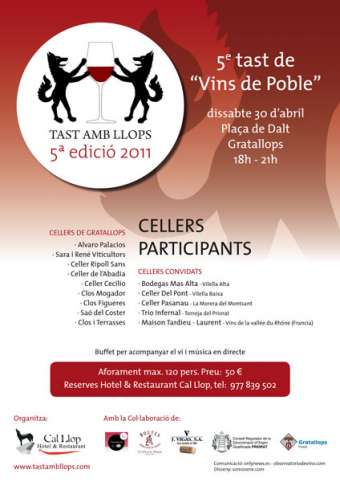